I’m always trying to get rid of things, especially coffee mugs. Before we moved, we had enough to serve coffee to a small state. One day when we’d gotten behind on the dishes and had nary a fork, plate, bowl, or spoon that was clean and ready to use, I pointed out to Bill our rack of coffee hooks, still full of cups ready to go. Since we generally use two each every day (one for coffee in the morning, one for tea in the evening)…well, we had a lot of cups.

One cup I wanted to send on its way but he always insisted on keeping was a footed white mug with a black line drawing of a penguin and the words “Little America” in fading letters. Little America, he explained, was the U.S. base in Antarctica and so the cup (which he’d bought at a yard sale) had come an awfully long way. And so we kept it and when I packed the kitchen for our move it came along.

We were just a bit surprised as we drove across Wyoming toward Utah when we started seeing signs announcing Little America. It was only 75 miles away and had marble showers, announced the first of a series of signs. Others followed, with pictures of an attractive blonde at ease in a much more comfortable looking hotel room than you’d expect on the Interstate. Another promised soft ice cream cones for 75 cents. We needed a stop anyhow, there isn’t much to stop at in Wyoming, so we pulled up. Inside was a high-ceilinged, airy room with lavish rest rooms, a soft-serve ice cream station and other fast foods and piles and piles of tourist items. Eventually I learned there was a second area that was more of a “real” truck stop and that the real truckers went to. Truckers–who spend most of their time sleeping in their vehicles and paying for showers  individually (unless they get them as a bonus for buying gas) and have no need to worry about what anyone thinks of their appearance and mostly only talk to other truckers and the familiar wait staff at truck stops–are pretty easy to spot in a crowd. There were no truckers in the touristy building we were in.

But it was fine for us, and we took a long break from the road. I wrote a blog post on my tablet. Bill wandered the knick knacks. We debated whether this was the true origin of his penguin mug, and I pointed to the similar-looking penguins adorning the motel to bolster my belief that it was. Why penguins in the middle of Wyoming? Wikipedia eventually provided an answer: It was built 1952 to be an oasis in the otherwise empty expanse of Wyoming (it still is, pretty much) just as the camp in Antarctica was a little area of warmth and hospitality in an otherwise unwelcoming landscape. The man who created it, incidentally, died last year with a net worth of $3 billion.

After wandering around for quite a while, and sharing a grilled cheese sandwich and an order of onion rings, with Bill still not completely convinced about Little America, the truck stop vs. Little America of the South Pole, we decided it was past time to get back on the road and on to the next state. We were on our way out the door when Bill stopped abruptly.

“There they are!” And he pointed to a shelf near the floor where rows and rows of mugs just like his stood, silently settling the argument. But, he said, he liked this better–having stumbled upon where his mug came from this way, rather than from some tourist shop on the other end of the world.

And so he bought another to make a matched set with the first. 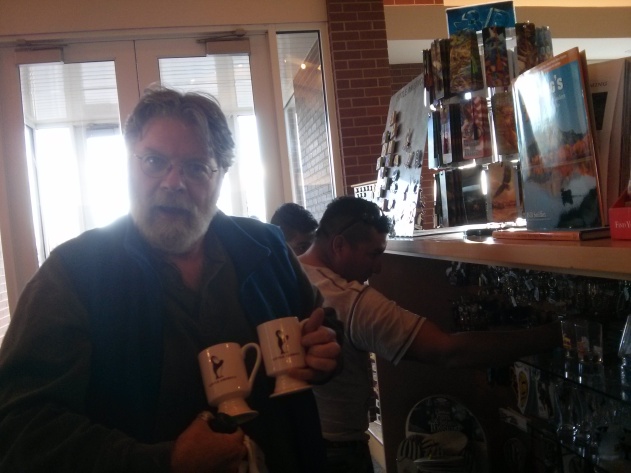