We had decided that Snohomish was the right town for us after all. But where to actually live? Bill had his wish list: A yard, some grass, a house, not an apartment. Someplace where I could have a vegetable garden, since I had a huge one back in Woodstock.

Bill is a very avid vicarious gardener–perhaps he’d be an avid gardener himself if he could bend down and sit on the ground as easily as I can. Us growing our own foods sets off a primal form of satisfaction in him. It reminds me of the first time he went fishing after we got together. Generally, he’s a catch-and-release fisherman, but this one time he killed and cleaned a bass, cooked in on the grill, and watched me eat it with intense satisfaction. Me…feed…woman.

So, he wanted a garden. I wanted to walk to town.Walking into town was one thing I loved about the house we briefly owned in Massachusetts and one of the few things I didn’t entirely love about the Woodstock house–it was three miles to town so walking there and back was enough of a commitment that I only did it once. If we were a walkable distance to town, we would both walk more, I thought.

The final item on our wish list was not a wish but a must-have: rent approximately equal to the rent we would receive for the Woodstock house. That might be tricky, I realized, because Snohomish County is an upwardly mobile county in a region where the rapid dominance of tech has brought growing economic might. It’s also closer to the big city (the next county down is King County, which contains Seattle), and much more urban than rural Ulster County was back in the Hudson Valley.

November is a tough month to look for rentals (conversely, a pretty good month to be a landlord looking for tenants, I’ve found). The woman at the real estate agency looked through her list of rentals, thought for a while, then asked if we’d be willing to come up some over our target price.

Then she called one of the agents to ask if some prospective landlords might be willing to come down some from their price. Yes, was the answer.

We were skeptical–the proposed price was the same as for the condo in the middle of town that was pretty nice and would save us on utilities, yard maintenance, water, and garbage removal. This house didn’t sound any bigger than that large condo. But we agreed to take a look. And then we fell in love.

Ludwig Road turned out to be right next to, and parallel to, route 9. Suburban-style houses, side by side, fairly modest, then a new development in the midst of being built, and then…a tall white farmhouse, set back from the road, with two horses grazing in a paddock in front of it. The horses belonged to a family friend who lived nearby and they would be leaving soon, we were told. They looked like they belonged–it seems that every house in Snohomish with a bit of land has to host at least two horses on it. There was a large and beautiful old gray barn, a shed by a paddock in the back with a couple more horses, a wood shed and a long flat building that turned out to be a chicken coop. It had been a real working family farm.

But what really got us was the living room. It stretched the entire length of the house, with large windows on three sides and light pouring in from all directions, even on a rainy November day. The wallpaper had a 50’s look to it, though I imagine it’s really newer than that, light colored with a reflective sheen and sparkly accents that, Bill believes, make the room even brighter. I knew that lots of windows, letting in lots of natural light, would be my best defense against the psychological effect of the Northwestern winter gloom. I immediately wanted that living room.

But still, the rent was higher than we wanted. Well, we thought, we don’t actually need 9 acres. So I made a counter-proposal: Could they come down on the rent if we took just the house and the yard and the owners could still keep the paddocks to rent out for horses? The answer was yes–and they came right down to our planned maximum price.

There are a lot of things I love about this house: Its age, its character, the way you can see it from Route 9, for just a second between the trees, standing stately under a street light. The little trapdoor by the bathtub that goes straight down to the basement–for dropping laundry it was explained, and now I do that every day.

But the most perfectly on-target perfect thing about the house is the light fixtures in the living room. Relics of another era, they resemble nothing so much as fake flying saucers from bad 1950s sci-fi. Bill, the MST3K fan, used to have “Bad Movie Night” every couple of weeks where he and a friend or two would watch something like Robot Monster.

It was as though the house knew we were supposed to live here. 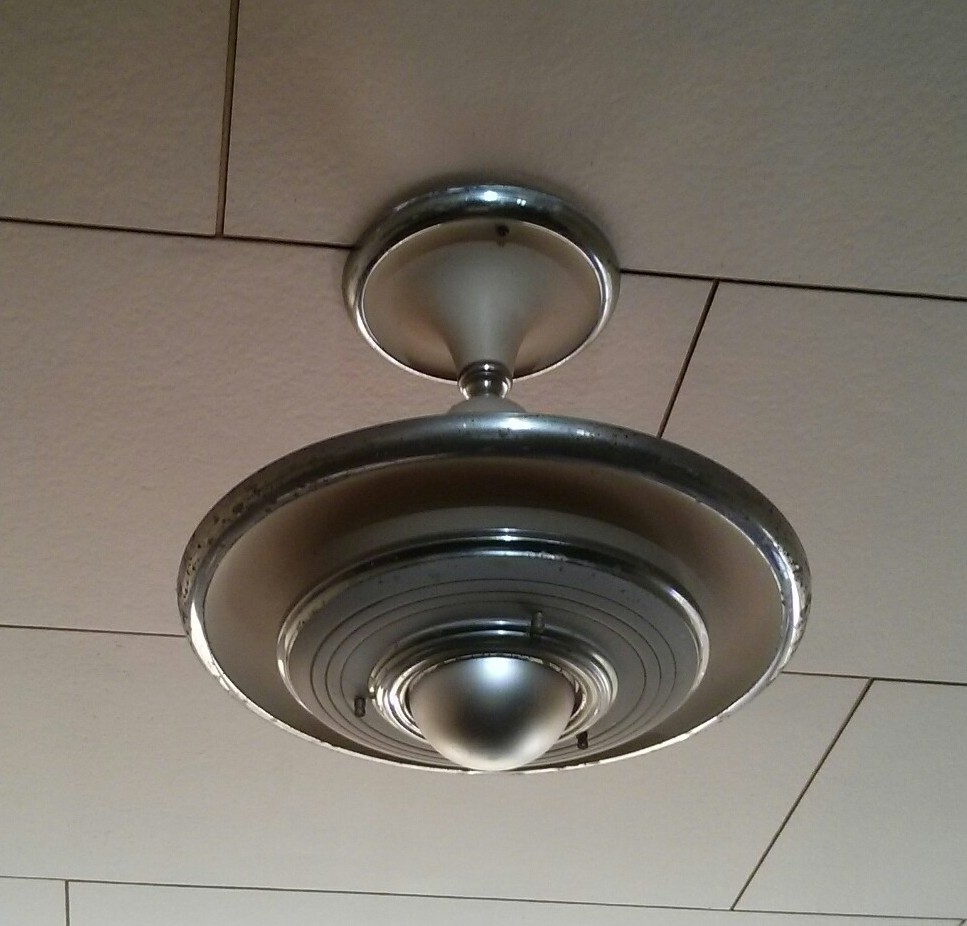